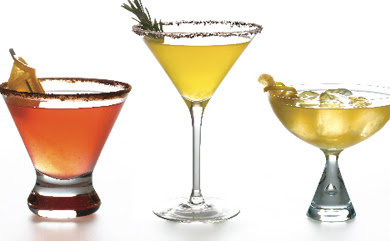 The Topic: Bringing on the booze without breaking the bank with Editorial Assistant Rashida Harmon

The Dish: If the rising popularity of the Vegan Drinks movement is any indication, vegans are no strangers to the party scene—and what better time than St. Patrick’s Day weekend to bust out the brewskies, pump up the jams, and let loose, vegan style? Most seasoned bar-hoppers are well aware that one pint too many can lead to a state of drunken dementia, wherein any attempts at frugality crumble with each gulp. To protect your pocketbook while sustaining your buzz, here are my tips for stocking your home's vegan bar on the cheap.

1. Buy Bulk
If you can tolerate astounding levels of overstimulation, wholesale and overstock stores such as Costco, Smart & Final, and Grocery Outlet can be excellent sources of quality booze—often in massive quantities. Though inventory at each store varies by location, veg-friendly beer brands such as Blue Moon, Gordon Biersch, and Pyramid Brewery can be found by the truckload at some Costcos, while Grocery Outlet and Smart & Final have a vast selection of wine and spirits. Sniffing out confirmed vegan products may require a keen eye (and a refined palate), but with comprehensive guides such as Barnivore circulating the web, you’ll be sipping on a cruelty-free drink in no time.

2. Go Generic
Vegan-friendly favorite Trader Joe’s is a veritable bastion of boozy bargains if you steer clear of brand names. Its beloved Charles Shaw reds—known in many circles as "Two Buck Chuck" due to their $1.99 pricetags—have received the vegan seal of approval, as have many of its generic microbrews. The store's summery beers, such as the Mission St. Hefeweizen and Simpler Times Lager, are refreshingly cheap compared to corner-store counterparts. If you’ve got partying on the brain, load up your cart with the aptly named Frugal Joe’s Ordinary Beer, as low as $3.99 for a six pack.

3. Get Crafty
What’s a cocktail without a few fancy flourishes? Specialty drink mixes, infused liquors, and other alcoholic accoutrements can set you back a pretty penny, but with a little bit of creativity—and a healthy dose of patience—you can DIY your way into a bar display that’ll have your guests green with envy long after St. Patrick’s Day is over. Whip up your own simple syrup by dissolving two cups of your favorite granulated sweetener into one cup of boiling water, then add lemon and lime juice for a homemade sour mix that'll kick up your margarita an extra notch. Slightly more adventurous mixologists can try their hand at DIY bitters by steeping aromatic herbs and spices in grain alcohol for two weeks. You’ll save at least $10 and finally have an excuse to use up the extra stuff on hand in your pantry!

The Final Word: Whether you like your drinks shaken or stirred, or prefer a fine glass of Merlot, your days of doling out big bucks for booze are over. If your well-stocked vegan bar is slow going, or you’re finding yourself flush with cabin fever, you can always venture out to happy hour at a local vegan-friendly bar to get your drink on at a discount. No matter where you are, grab a buddy, keep some H20 handy, and leave your big bills at home!
Posted by VegNews Magazine at 11:33 AM