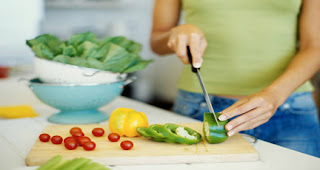 The Topic: Refining your vegan culinary skills without breaking the bank with VN Office Manager Lyndsay Orwig
The Dish: This month, I will be celebrating my 10-year anniversary of being vegan. It feels like just yesterday when I made the decision to no longer eat animal products when I was a junior in high school, but when I really reflect on the last 10 years, I realize that my diet has changed since that time. For about the first five years of being vegan, I subsisted for the most part on convenient, pre-packaged food. This was mainly due to my being in school with little time on my hands, but since graduating, my culinary skills have definitely made a major leap in the right direction, and I'm happy to say that nearly 95 percent of the food in my fridge today is whole ingredients, and I cook a meal almost every night of the week. This has really taken a load off of my wallet, and I'm also much more fulfilled with my vegan lifestyle than I was during the first five years.
With my new love of cooking, I have dreamt of going to culinary school in order to perfect my skills in the kitchen, but I honestly don't see that happening—I can't just pull 25 grand from my back pocket, no matter how hard I wish. Luckily, I have figured out some great ways to hone my skills without spending too much. Here are three ways to become a super chef in your own kitchen, on the cheap:
1. Stock Up on Supplies and Staples
OK, this is more about preparation, but if you're not prepared, then there's no way that you will improve on your skills in the kitchen. I know it may seem like a daunting task to build your spice rack and to increase the amount of kitchen appliances that you own—I know, I've been there! To make it less daunting, I have followed the motto, "Steady goes it." I have been working on my spice collection for the past four years, and it is finally well-stocked. I have also done this with my appliances, acquiring some as Christmas and birthday gifts, and sometimes just saving up my money. And even though Williams Sonoma is a pretty sweet store, I would suggest you go somewhere else in order to save some dough. Even better, check out garage and yard sales, flea markets, and thrift stores—these could have some real treasures. And for spices and other staples? Repeat after me, "Buy in bulk."
2.Use Cookbooks as Your Guide
I have learned all my skills from my cookbooks, and just like with my staples and supplies, I have built my cookbook library steadily. OK, confession time, I am a cookbook fanatic, and in all honesty I have way too many. Seriously, they have literally taken over my small studio apartment, and I know my boyfriend is getting seriously annoyed with my cookbook-collecting ways. That being said, I won't give them up, because I have learned so much from them. However, you really just need a few to start with, and I would really suggest to get a more general vegan cookbook, which also contains a basic cooking skills section, such as Veganomicon or a 1,000 Vegan Recipes. If you don't have enough money to buy even a few cookbooks, then try the library.

3. Recipe Testing
This leads me to my next point—becoming a recipe tester! This is my newly discovered way of honing my culinary skills. I have been recipe testing for Robin Robertson for the last couple of months, and I have just started to recipe test for Joni Marie Newman's new cookbook. Excluding the great perks of recipe testing (being acknowledged, getting a free copy, and getting to know an awesome cookbook author), it's also a great way to learn new skills in the kitchen. Since becoming a tester, I have made a bouquet garni, and jam for my very first time. Unfortunately, the jam didn't turn out too well, but I was able to discuss the problem with the author, and received some good suggestions to succeed the next time I make an attempt. To become a recipe tester, check out various cookbook authors' blogs, as well as their Twitter and Facebook accounts.


Final Word: You don't have to go to culinary school in order to perfect your skills in the kitchen. You just need to practice, practice, practice! Participate in local vegan potlucks, and occasionally cook for friends and/or family members. The ones closest to you are usually the toughest critics, and nothing will make you a better cook than constructive criticism. Finally, be sure to cook food the you want to eat. That way everything you cook will be a spectacular treat!

Posted by VegNews Magazine at 6:00 AM