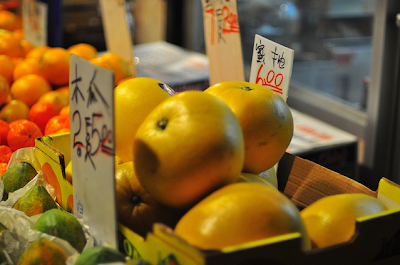 The Topic: Filling up your grocery bags at ethnic markets (and saving tons of money while at it) by VegNews Editorial Assistant Alexandra Chang.

The Dish: It’s true that buying groceries and eating in is cheaper than going out, but there’s also a significant price difference between buying groceries at Whole Foods or Safeway and getting the same veg-friendly products at an ethnic market. Here in San Francisco, ethnic market tends to mean any of the dozens of Chinese, Japanese, Korean, Mexican, and Indian markets throughout the city. But even if you’re not in a metropolis, there’s probably at least one ethnic grocer near where you live. Though they might be a bit intimidating at first, the rewards are completely worth it.

1. Basics First: For grains, noodles, and beans, these markets have the best deals by far. I grew up eating rice at every dinner, and have fond memories of lugging bags bigger than my torso into the trunk of the car. My family of five went through a 50-pound bag in a few months, but now I can hardly get through five pounds in that time. For $30 at any Asian market, 50-pounds—around 250 uncooked cups—lasts forever for one person. You’ll also find packs of eight single-serving shaped rounds of dried noodles for 99-cents. And beans? The prices at Mexican grocers are insanely affordable.

2. Milk and Meat Replacements: Every Asian market has at least a few brands and varieties of tofu. Larger grocery stores like 99 Ranch have more than a dozen. Silken, extra-firm, baked, seasoned, or fried, because it’s such a cultural staple, tofu goes for cheap. You can even afford to experiment with different types—I love extra-firm and baked tofu—in your favorite recipes. Non-dairy milk is also plentiful, ranging from unsweetened rice to chocolate soy, all for at least one-third less than natural foods markets.

3. Spice up a Meal: I went to a big chain grocery market recently (as a last resort for some Earth Balance) and saw tiny containers of spices priced at $8.99. Granted they were organic and fancily packaged, there is no reason for a savvy vegan to purchase such items when just as satisfying spices reside in the aisles of any ethnic market at one-eighth the cost or less. The same goes for premade sauces—soy, black bean, vegetarian BBQ, and all. It’s simple and cheap to achieve the layered taste of a great Indian curry or prepare a delicious Chinese stir-fry.

4. Produce Galore: Though you may not be able to afford kale from natural food stores or farmers’ markets on a daily basis, you will be able to stuff your cart full at ethnic markets. At my favorite neighborhood produce joint, kale is only 99-cents per bunch. Usually steep-priced special veggies are also discounted, in particular those associated with the culture’s cuisine. Baby bok choy, Chinese broccoli, edamame, and various mushrooms are cheaper in Asian grocers, while Mexican grocers’ tend to have lower prices on peppers, olives, and avocados.

5. Surprise Treats: Ethnic markets aren’t only for your everyday staples; they’re a place to explore the variety of veg-friendly food items you’ve never tried or even seen before. Ever heard of basil seed drink or sweet sesame-filled rice balls? Or thought about adding pickled radishes and kimchi to your next meal? What might be considered specialty items at the standard grocery store are so common to certain cultures that they’re cheaper than buying a can of soda at Walgreens. Treat your taste buds to new flavors, without hurting your wallet.

The Final Word: Seeing the total amount at the checkout stand of ethnic markets never fails to surprise, in the best of ways. So if you’re on a budget and looking for regular grocery items or wanting to cook up a fantastic meal from another culture, then add ethnic markets—may they be Asian, Mexican, Indian, or other—to your grocery shopping rounds.

Posted by VegNews Magazine at 2:00 AM