How to be a Cheap Couch Potato 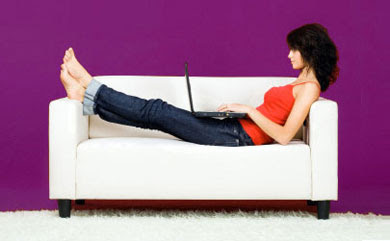 The Topic: How to be a couch potato and cheap, by VegNews Office Manager Lyndsay Orwig

The Dish: So I'm going to confess—if I'm not at work at the VNHQ then I'm being a couch potato at home, and a big one at that. Let's just say that if I'm not on the couch, I'm in the kitchen preparing something to eat on the couch. But seriously, you don't have to feel sorry for me, because I absolutely love it. I work hard in my career, so I don't feel guilty about having leisure time, and I consider my big, beautiful couch to be my friend. We've had some great times together. Jealous yet? If so, then read on, my dear friends, because I have made being a couch potato into an art form, as well as a frugal and enjoyable way of life. So here are some tips on how to be a couch potato on the cheap!

1. Netflix! I'm sure you've heard of this awesome movie rental service before, but it is one of my absolute favorite things, so you're just going to have to bear with me. I find Netflix to be a huge money-saver, because I love my movies. If you don't believe me, then I challenge you to a movie trivia duel! I have a really big collection of movies, which I'm guessing I've spent more than $2,000 on, but believe it or not, they are all from my past as a foolish high school and college student. I have not bought a single movie since the age of 21. OK, that might be a little bit of a lie, but almost! And now, Netflix has a great Instant Watch membership where you only pay $7.99 per month to instantly stream movies and television shows to your TV or computer. Yes, it is every couch potato's dream come true. Also, right now Netflix is running a one month free trial for instant watch, so if you haven't signed up yet, you should really check it out.

2. Make Your Own Snacks. I'm not your typical couch potato—I don't just snack on junk food such as potato chips and Sour Patch Kids (although, those can sometimes be super good). I get a lot of satisfaction from making my own tasty treats to munch on while being on the couch. Here are a few of my favorites. You've heard about these before, but Abby's biscuits are so simple and oh so delicious! These are my go-to snack on Saturday and Sunday mornings with some maple syrup or jam. For a low-fat snack chip, I like to cut some corn tortillas into pretty little triangles, spray some olive oil on them, and toast them at 450 degrees for about 10 minutes, being sure to turn over once. Then I serve them up with whatever dip I have on hand, be it some fresh salsa or hummus. Finally, if I'm in the mood for something a little more nutritious and substantial, I make myself a big ol' salad with whatever greens I have on hand, some baked tofu, and some really good homemade dressing. I recently scored a copy of Appetite for Reduction by Isa Chandra Moskowitz, and I'm in total love with the Peanut-Lime Dragon Dressing—a little sweet, a little savory, and just the right amount of spicy.

3. Get Your Read On! Yes, I love my movies, but I also love my books, and nothing's better than reading on a comfortable couch. Luckily, I have a huge collection of books that I still need to read. I also was gifted a really cool Nook Color for Christmas, and I've found that e-books are a bit cheaper than physical books. There's also the library, which is such a great resource—just don't rack up late fees, because they will haunt you for a lifetime. Lately, I've been obsessed with reading cookbooks, because as everyone knows, cooking homemade meals are way cheaper than buying from restaurants. Some of my favorite vegan cookbook authors include Robin Robertson, Isa Chandra Moskowitz, and Joni Marie Newman, but there are so many great ones.

The Final Word: It's not hard to spend a lot of money while being a couch potato. Believe me, I've learned that you can waste a ton of money on GrubHub, and though takeout is good some of the time, it's not the healthiest. Also, I don't condone spending every minute of the day on the couch, even though it's great. I ride my bike at least five days a week, and go out on the town when I can afford it. You can even use the couch as an exercise tool—sit on the edge and do some bicep curls and some leg lifts. Take it from a true couch potato, your couch can truly be your friend, not your enemy. Now sit back, and relax!
Posted by VegNews Magazine at 4:48 PM